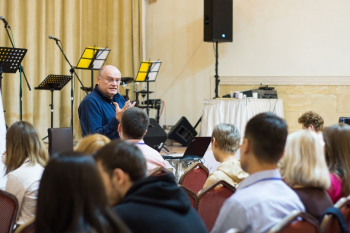 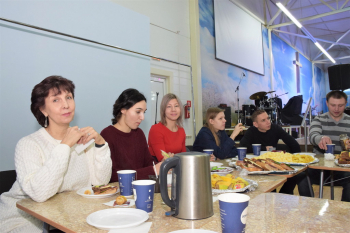 ROSTOV-ON-DON – There is a ministry at the Christ the Savior Church that gathers single Christians every month for discussions and tea. On January 18, they talked about how to find a way out of difficult life situations. The event began with praise and worship to God. This was followed by a short fun game. The meeting continued with a traditional tea party. Guests shared their news and testimonies of God's help in their lives. 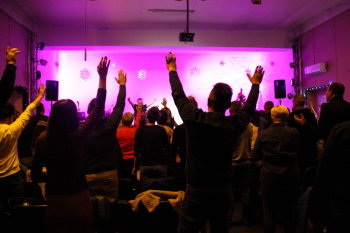 YALTA – December12–15, Bishop Vladimir Khvalov held a regional conference for families in the Crimea. The event was organized by Light to the World Church. The main speaker of the conference was Bishop Vladimir Khvalov, head of the family ministry of the Russian Church of Christians of Evangelical Faith. The musical part was conducted by the famous Christian performer Galim Husainov. 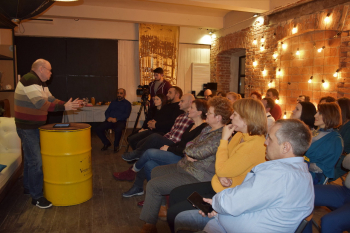 ROSTOV-ON-DON – On December 9, an unusual service took place in a cozy photo studio. The event was attended by couples who had not previously participated in the marriage ministry of the Church of Christ the Savior in Rostov-on-Don. The meeting began with informal fellowship and photos in beautiful New Year's locations. 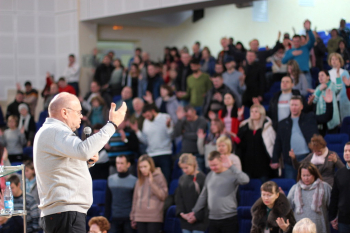 IZHEVSK – On November 22 and 23, a family conference entitled “The Work of the Holy Spirit, Family in Focus” was held in Izhevsk. 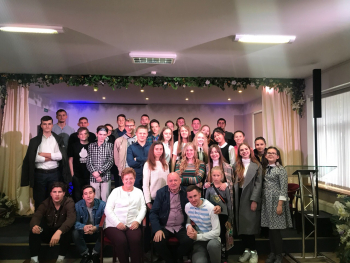 KALININGRAD – On October 4 and 5, a marriage conference took place in Kaliningrad. The key speaker of the conference was the Head of Marriage department of the Russian Church of Christians of Evangelical Faith Vladimir Khvalov (Rostov-on-Don). 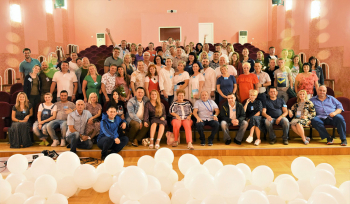 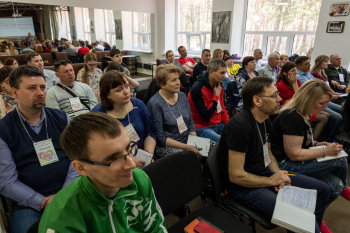 ALTAI – In May Vladimir Khvalov, bishop, head of family ministry department of the Russian church of Christians of Evangelical Faith conducted a “Power of double covenant” family conference by invitation of Light of Revival churches Association. 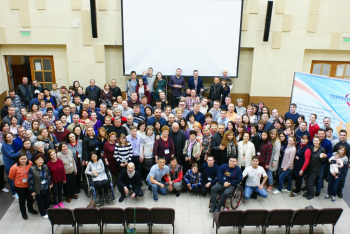 RAMENSKOE – On February 22 to 24, a family conference took place at Ramenskoe Christian Center. The topic of the conference was “Family and the work of the Holy Spirit”. Representatives from 23 churches of Moscow area took part in the conference. They were married couples and those who are preparing to get married. 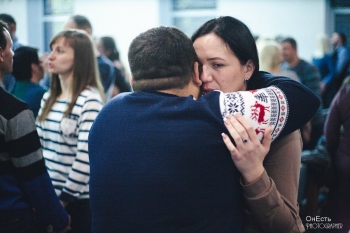 “Don’t be the next, but become the first”. Regional Marriage Conference took place in Kemerovo 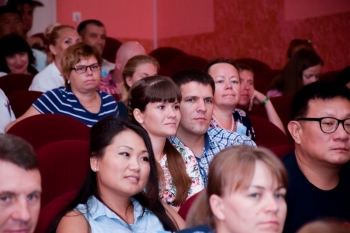 ANAPA (RUSSIA) – On September 3 to 7, in Anapa senior pastor of Christ the Savior Church bishop Vladimir Khvalov conducted the 15th Annual Marriage Conference “Territory of the Covenant”. The conference was conducted as planned by the Family Department of the Russian Church of Christians of Evangelical Faith. The organizational part was traditionally undertaken by the Christ the Savior Church of Rostov-on-Don.

About 140 people took part in the event. For the first time in 15 years the conference has become international. Couples from different regions of Russia and guests from other countries – Georgia and Belarus – attended it.

One of the most numerous was delegation from Moscow – The God’s Love Church alone was represented by 30 people. There were guests from Moscow area, Saint-Petersburg, Perm area, Republics of Udmurtia and Tatarstan, Smolensk area, Krasnodar area, Rostov area. Guests from Kursk, Sochi, Penza, Nizhny Novgorod, Crimea, Sverdlovsk and Murmansk area and Orenburg visited the conference for the first time.

Bishop Vladimir Khvalov preached about the effect of the words that spouses say to each other. He shared the principles of spiritual warfare for the family. He was talking about how to keep a marriage safe from adultery and sinful influence of the world, how to establish communication between the spouses, what the difference is of men and women conception of matrimony, and covered many more other issues significant for any family.

The issue of financial welfare was covered by the administrators of the conference – pastor of  Novocherkassk Christ the Savior Church Roman Shvechikov and his wife Irina.
Besides discipleship, a lot of time at the conference was devoted to the spiritual part. The ministers prayed for healing and blessing of the married couples who are not able to have kids or are trying to overcome some challenges in their marriage. There were interceding prayers for the families of Krasnodar area – the region that the conference took place in. Besides, the ministers were counseling and praying for all those who needed help.

Within a framework of the conference a roundtable discussion for ministers willing to start a family ministry in their regions took place. Pastors from several regions shared their positive experience of such ministry and told about their plans for the future.

At the end of the conference, according to the customary tradition, a solemn ceremony of the spouses’ covenant renewal took place for the couples who were not married in a church. Another touching moment was a fathers’ and daughters’ dance, prepared by the dance ministry.

“The conference was very inspiring for many participants, and for us this is a good testimony that the Lord has been really working in the families, — says bishop Vladimir Khvalov. — Among the participants there were people who have been married for a long time, and the newly married couples, many came with children. It is a joy that people were able to have some rest, swim in the sea, sunbathe and at the same time receive some important revelations for their families. And of course I’m inspired that in many regions the work on building up families started to develop. It’s a challenge that we, as a Church, take up today. And we will be happy if as many as possible churches will join the ministry”. 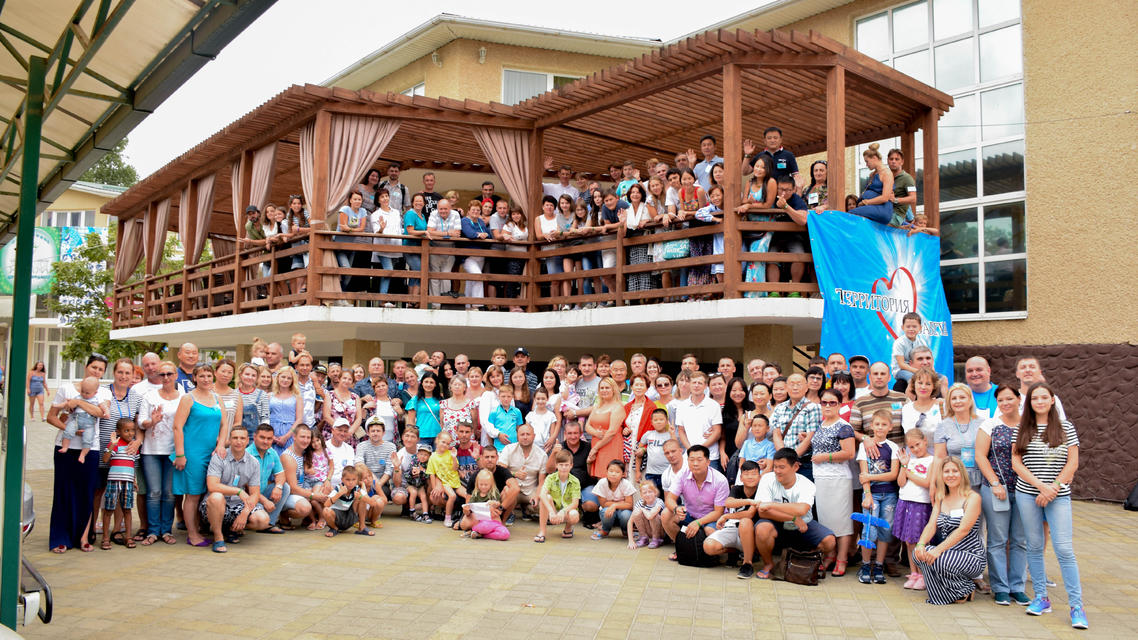 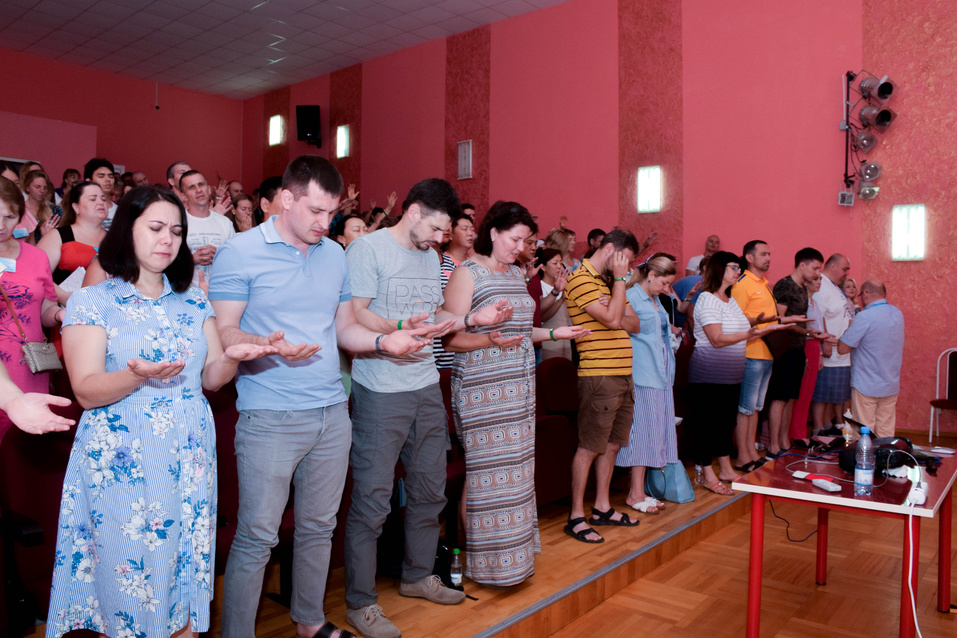 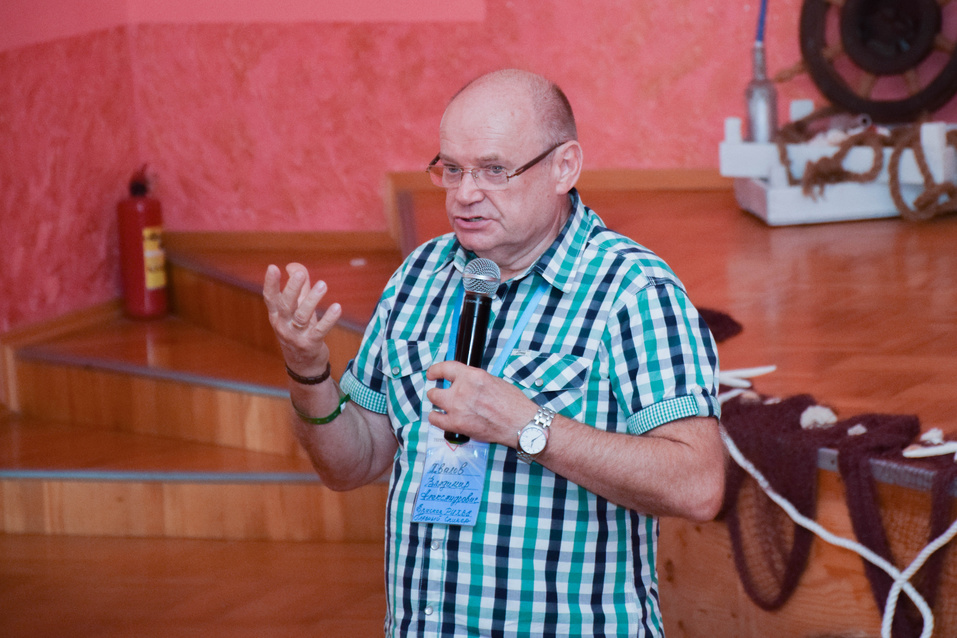 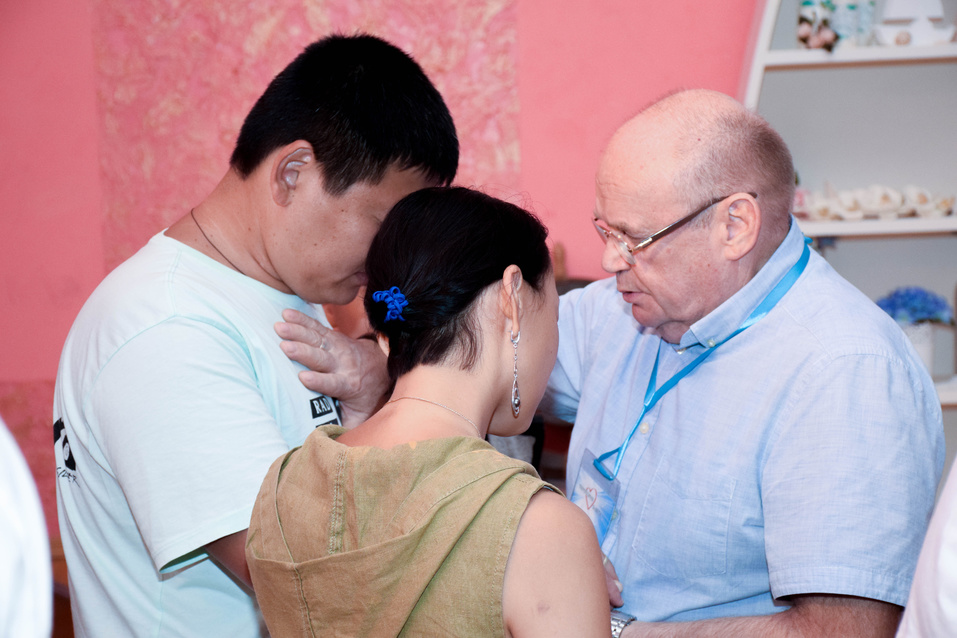 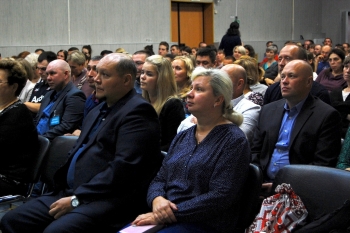 “The Power of the Double Covenant” Marriage Conference in Syktyvkar

SYKTYVKAR (RUSSIA) – “The Power of the Double Covenant” Marriage Conference took place in August at the Source of Life Church of Syktyvkar. The key speaker of the conference was the head of family ministry department of the Russian Church of Christians of Evangelical Faith Vladimir Khvalov.

During the three conference days Vladimir Alexandrovich conducted six sessions for those who needed to hear about how to build relationships with spouses, how to establish contacts with children and parents, what role of the Holy Spirit in a family is. The conference was authorly, the speaker covered the topics naturally and openheartedly. “As our mentality changes – our character and habits change as well” (a quote from the first session of the conference).

On August 17 to 19, each of the first services began with songs of praise and worship to God. Every session was covered with prayers, so that God helped to use the new knowledge in the family life. On Saturday, bishops Vladimir Khvalov, Pavel Kudrov and Vyacheslav Gerasimov, who came to the conference with his wife Natalia, prayed and anointed with oil those who wanted a prayer. At the sessions there were several acoustically challenged families, so church sign language interpreters ministered to them.

During the breaks between the sessions couples took pictures against the background of a soaring heart decoration specially designed for the conference.

We express our gratitude to Vladimir and Olga Khvalovs for their ministry and we believe that the conference is already bringing the fruit and Christian families grow stronger.

Media ministry of the Source of Life Church, Syktyvkar 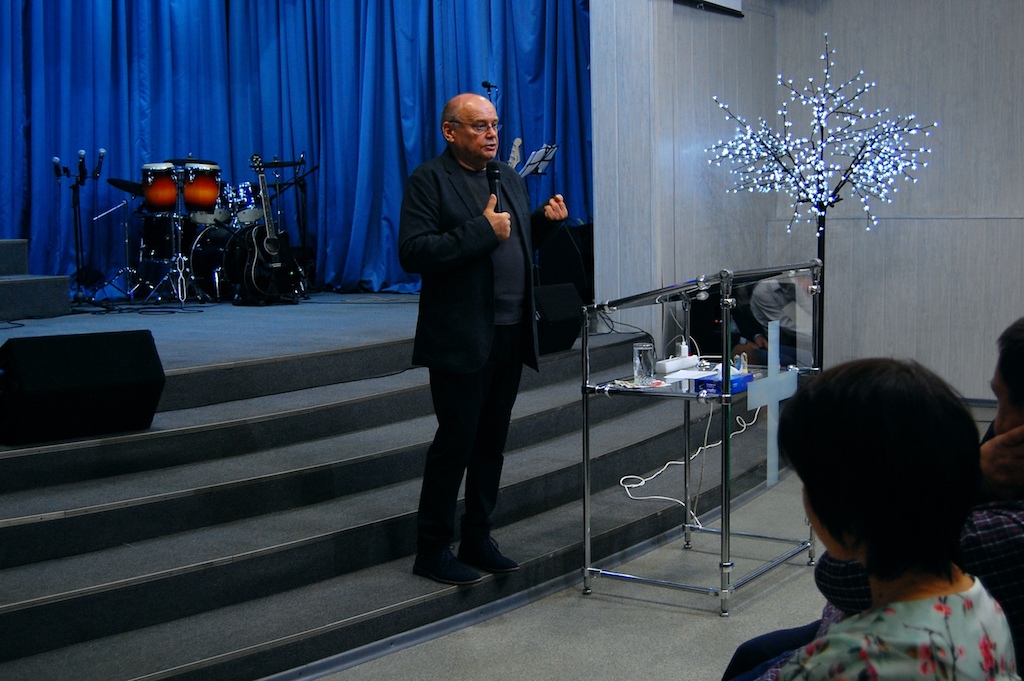 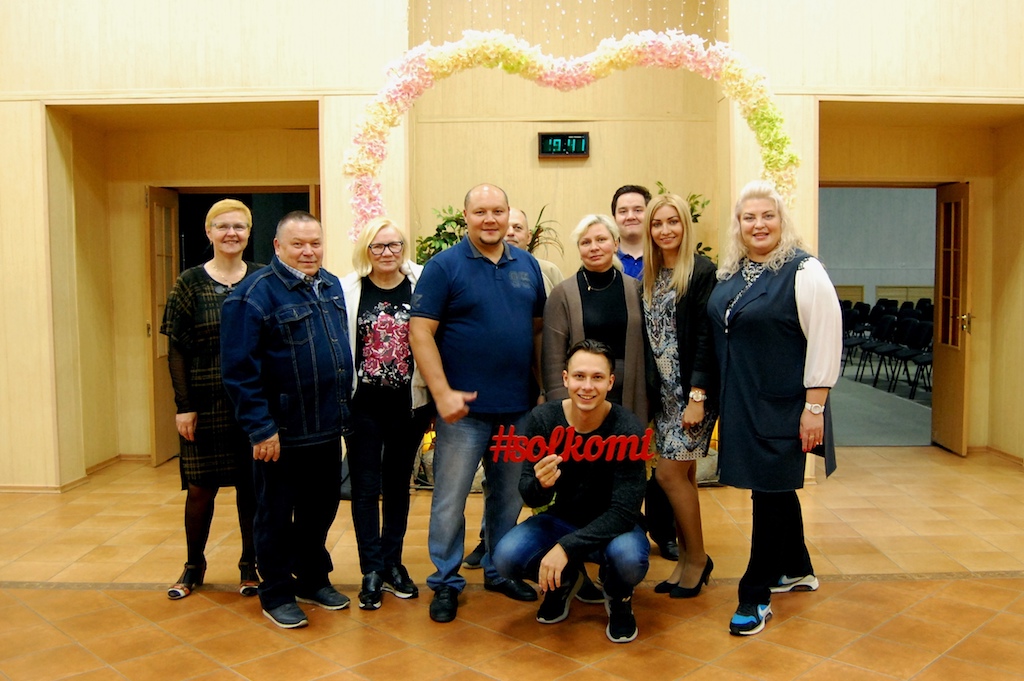 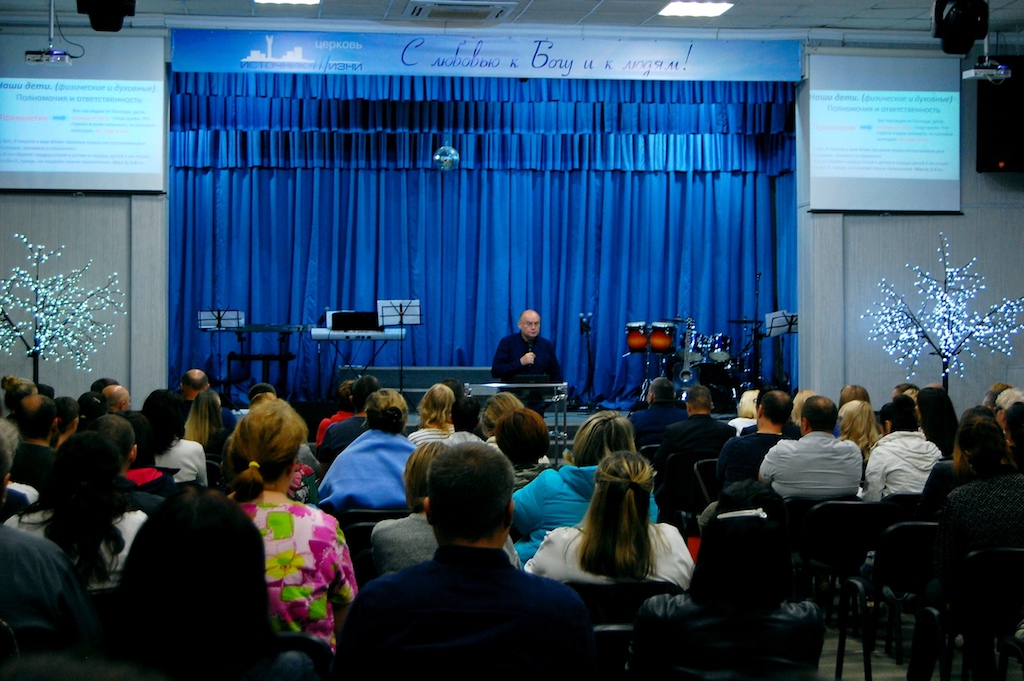 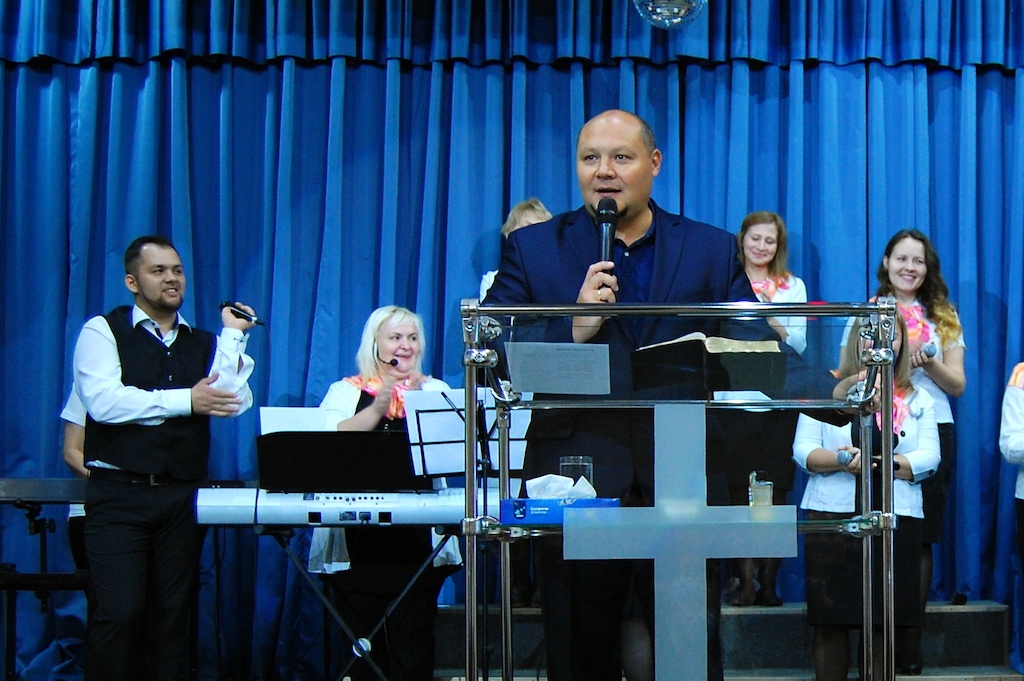 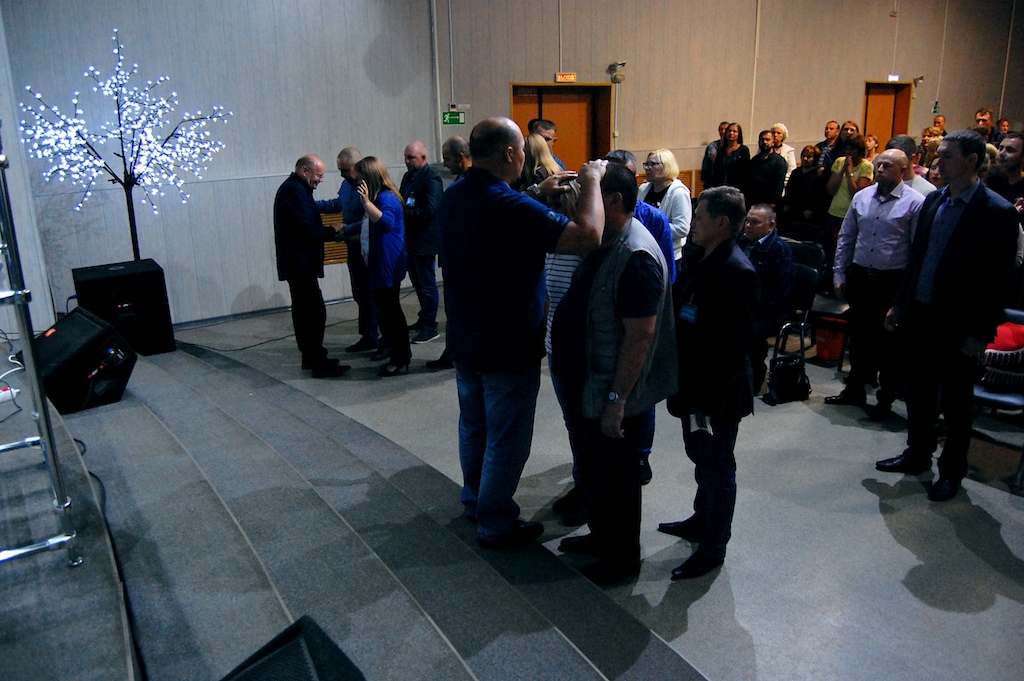 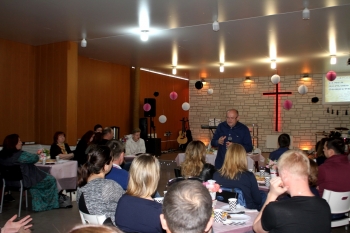 On June 10 to 12, the head of family ministry of the Russian Church of Christians of Evangelical Faith, senior pastor of Christ the Savior Church of Rostov-on-Don bishop Vladimir Khvalov and his wife Olga conducted a three days long conference “Family. Church. Society” in The Good News Church of Tyumen. 150 people from different churches took part in the conference.

The schedule of the conference was full. The speakers ministered to men and women separately and ministered to families and individuals.

“It feels like we’re climbing a mountain, and at each marriage conference more and more God’s glory comes to the ministry. This time there was less theory but more prayers. We spoke about fatherhood, about honoring the family and church. God gave us prophecies, people felt the touch of the Lord, made important decisions, received healings”, — said bishop Khvalov.

During the trip the bishop had a meeting with leaders of ministries from different churches of Tyumen and ordained one of the ministers to the deacon of the church. 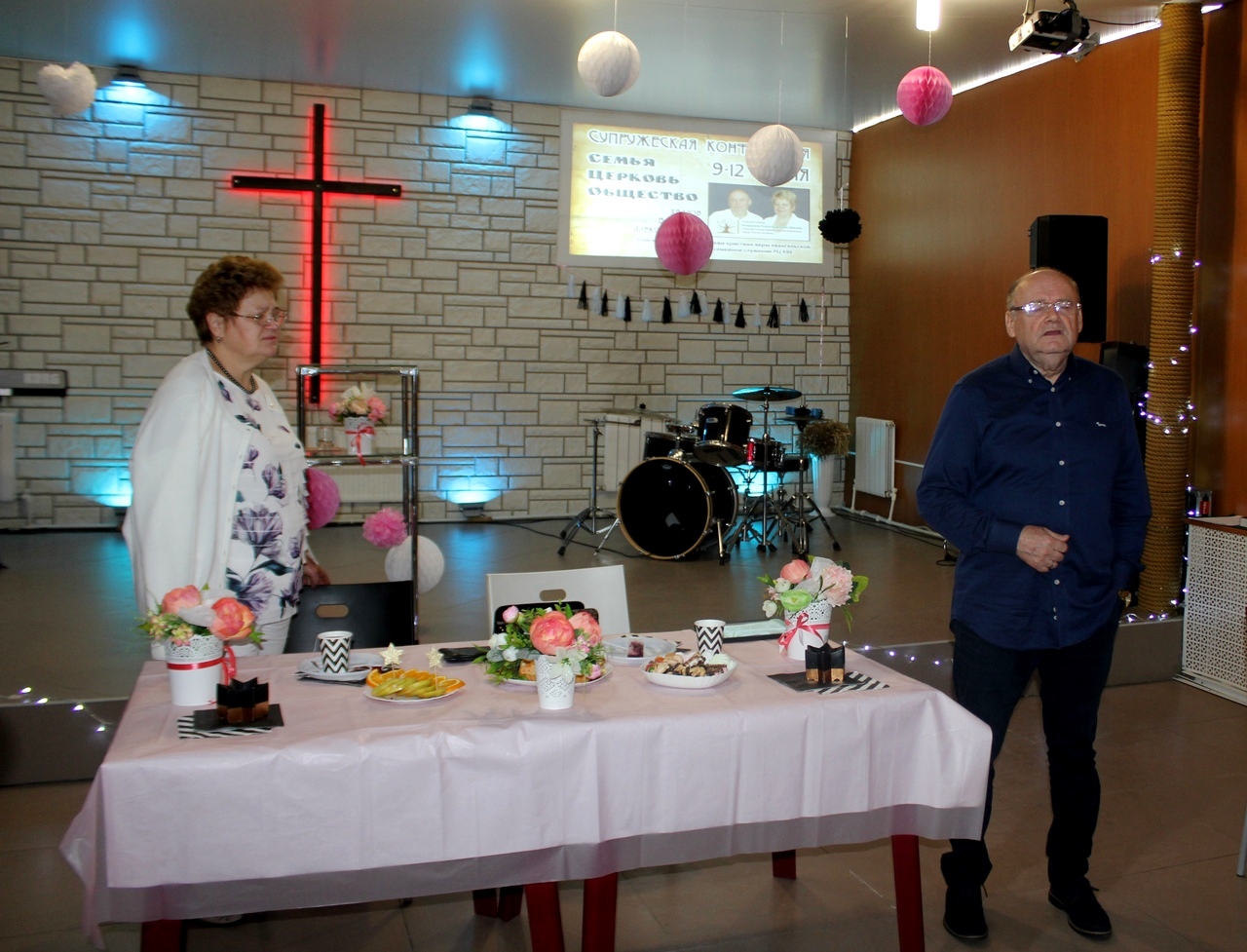 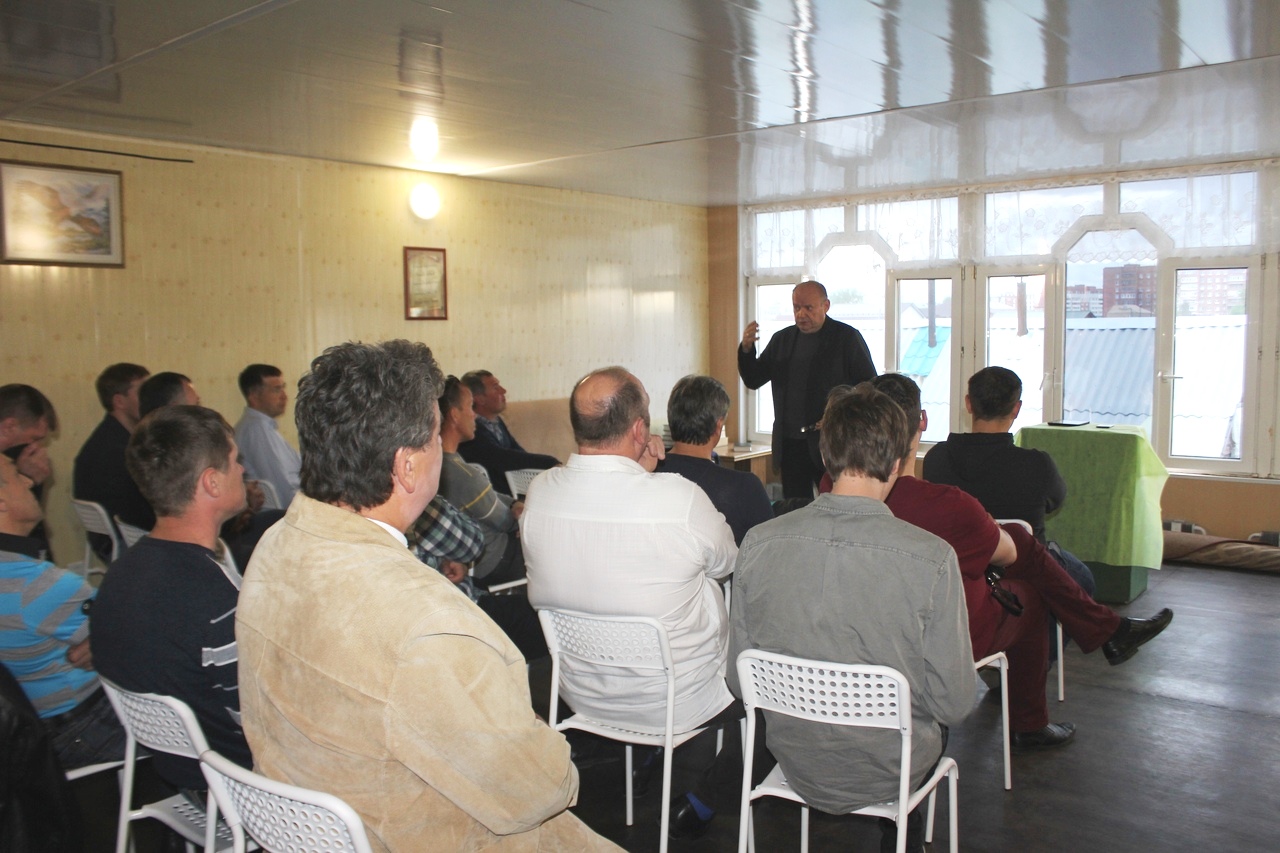 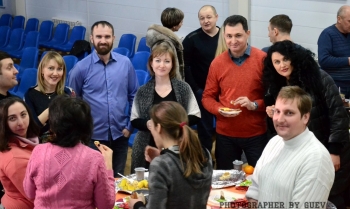 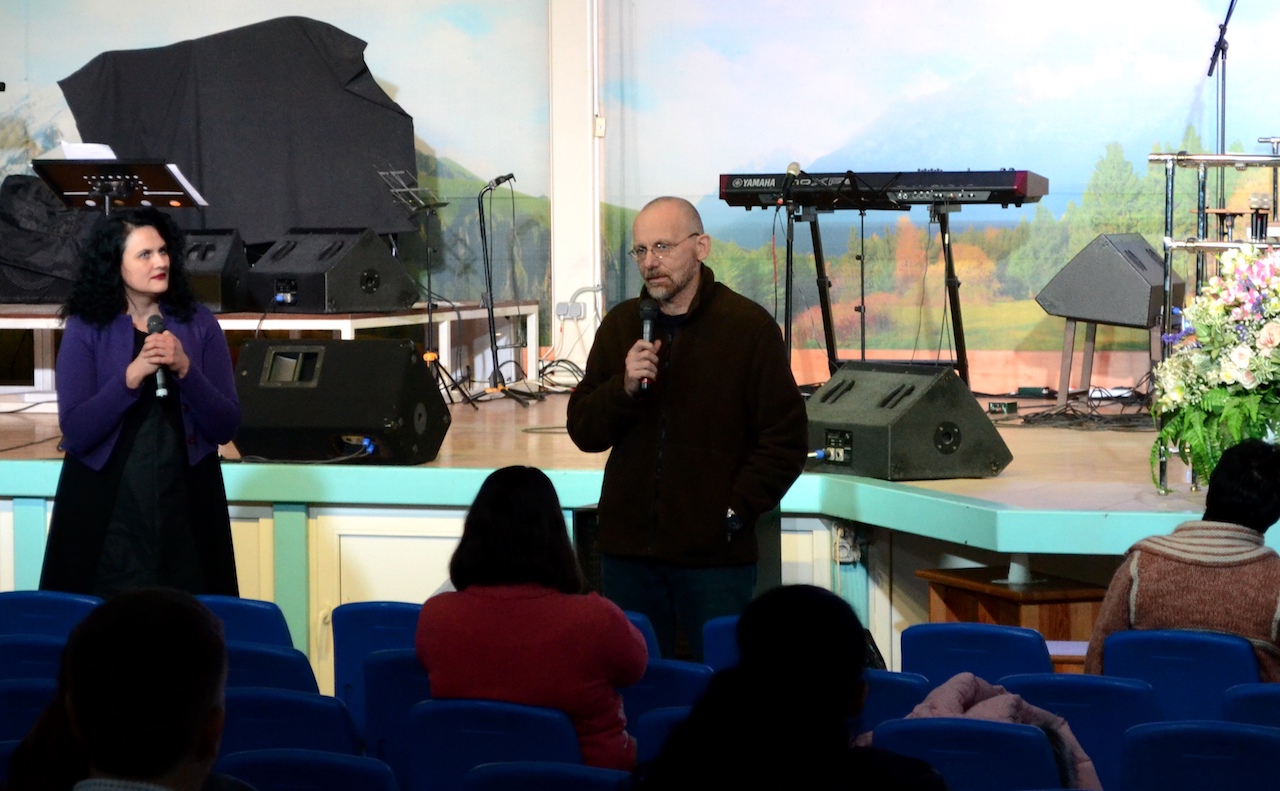 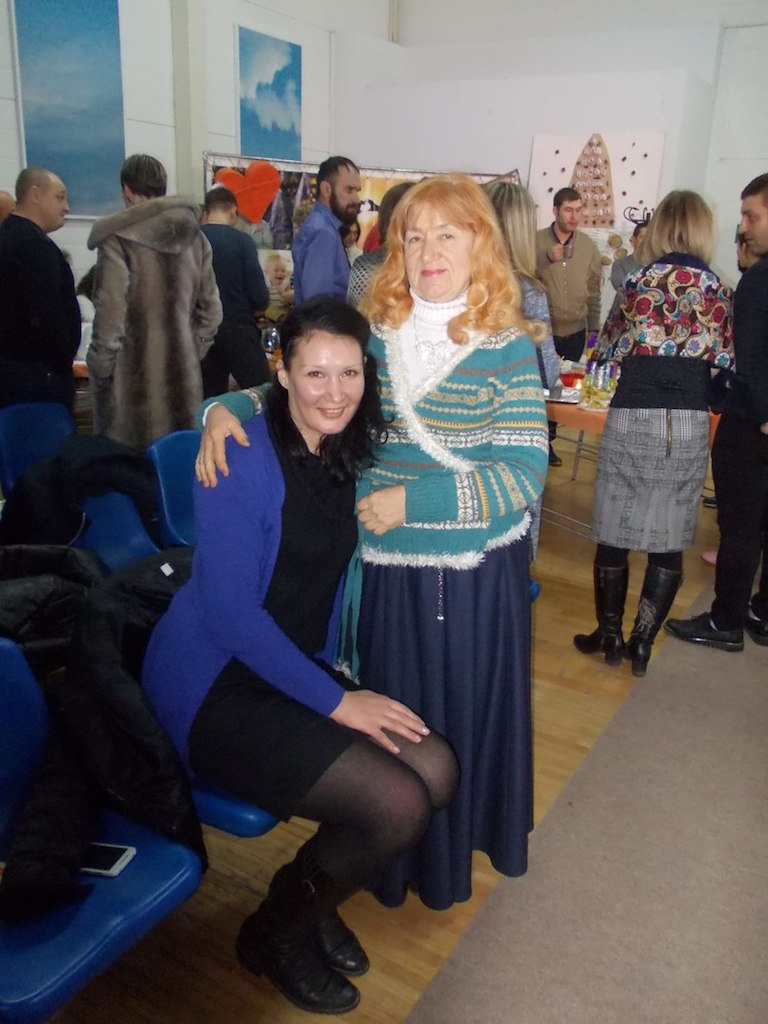 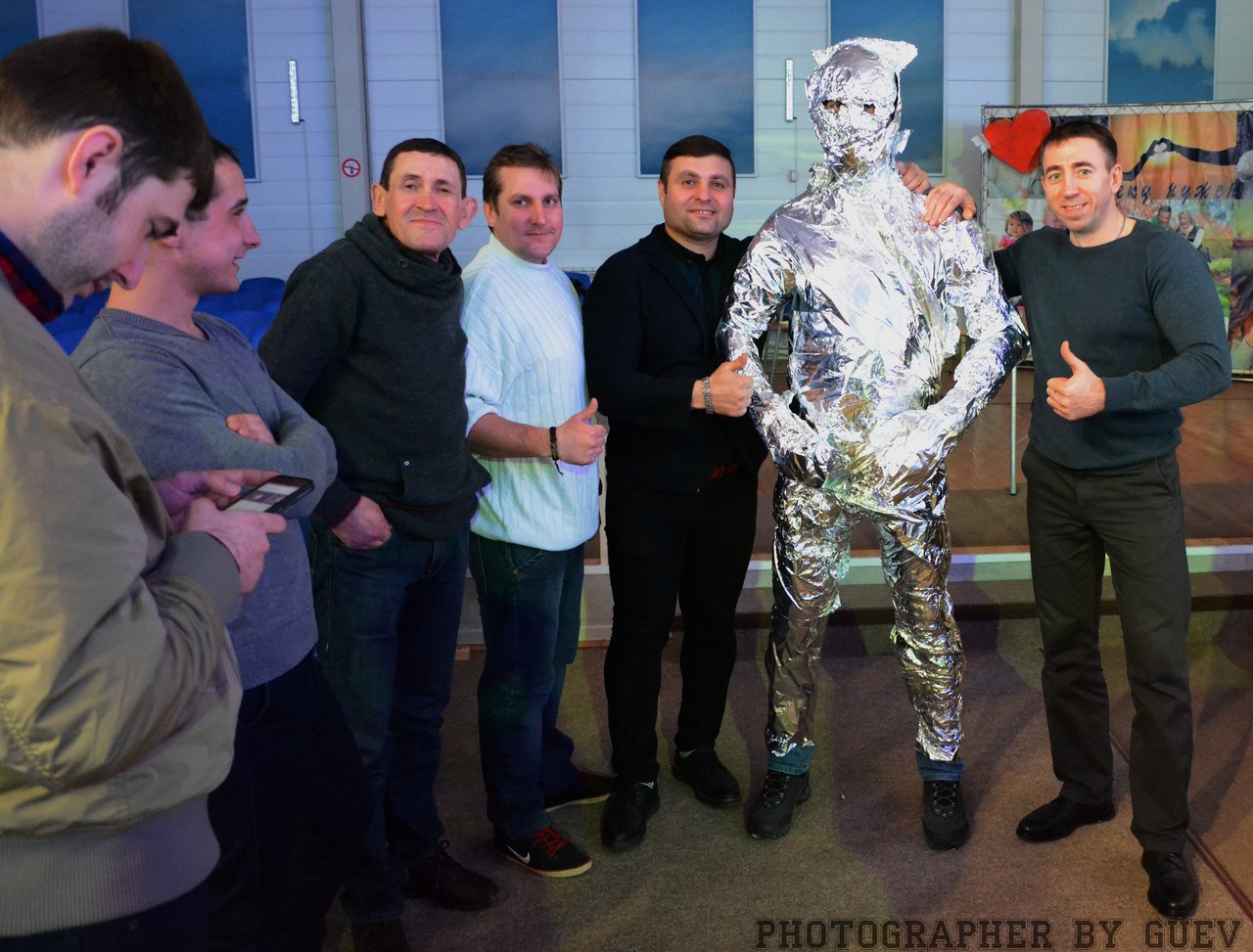 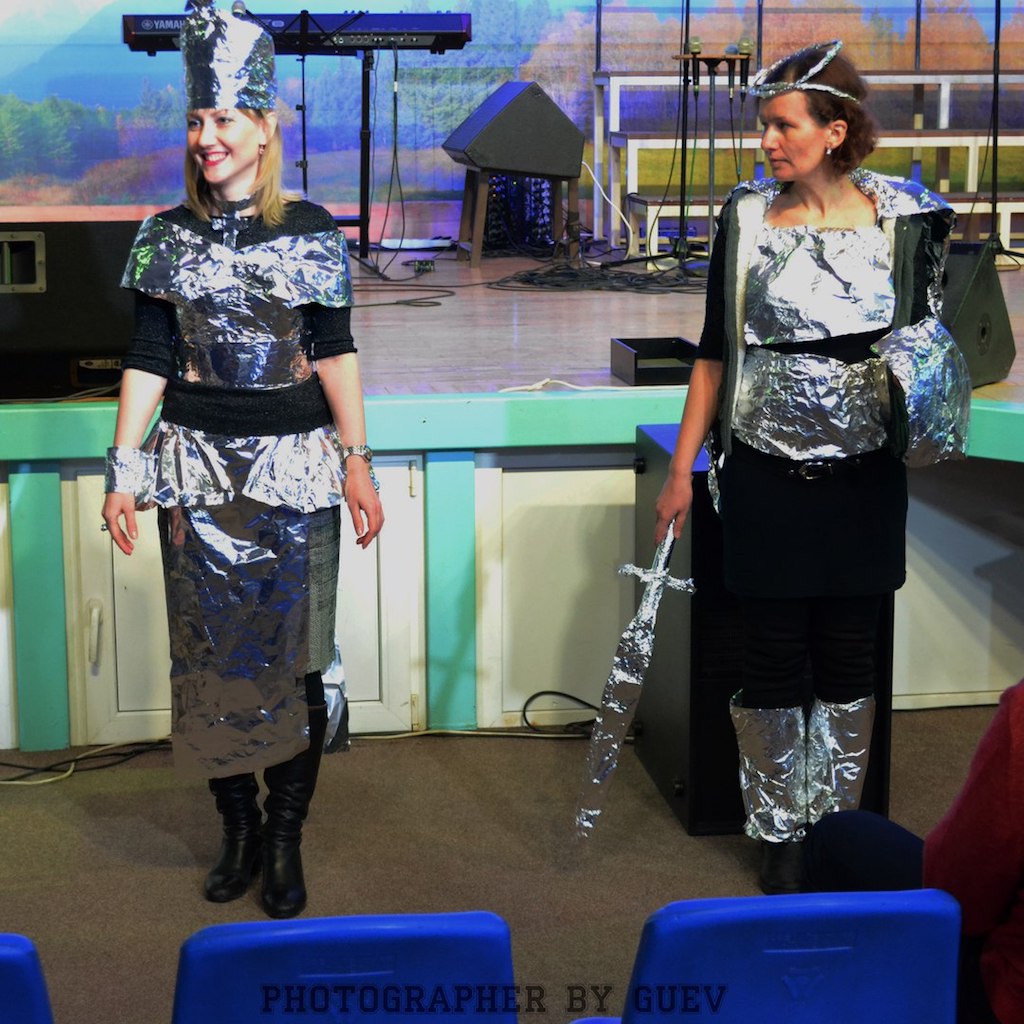