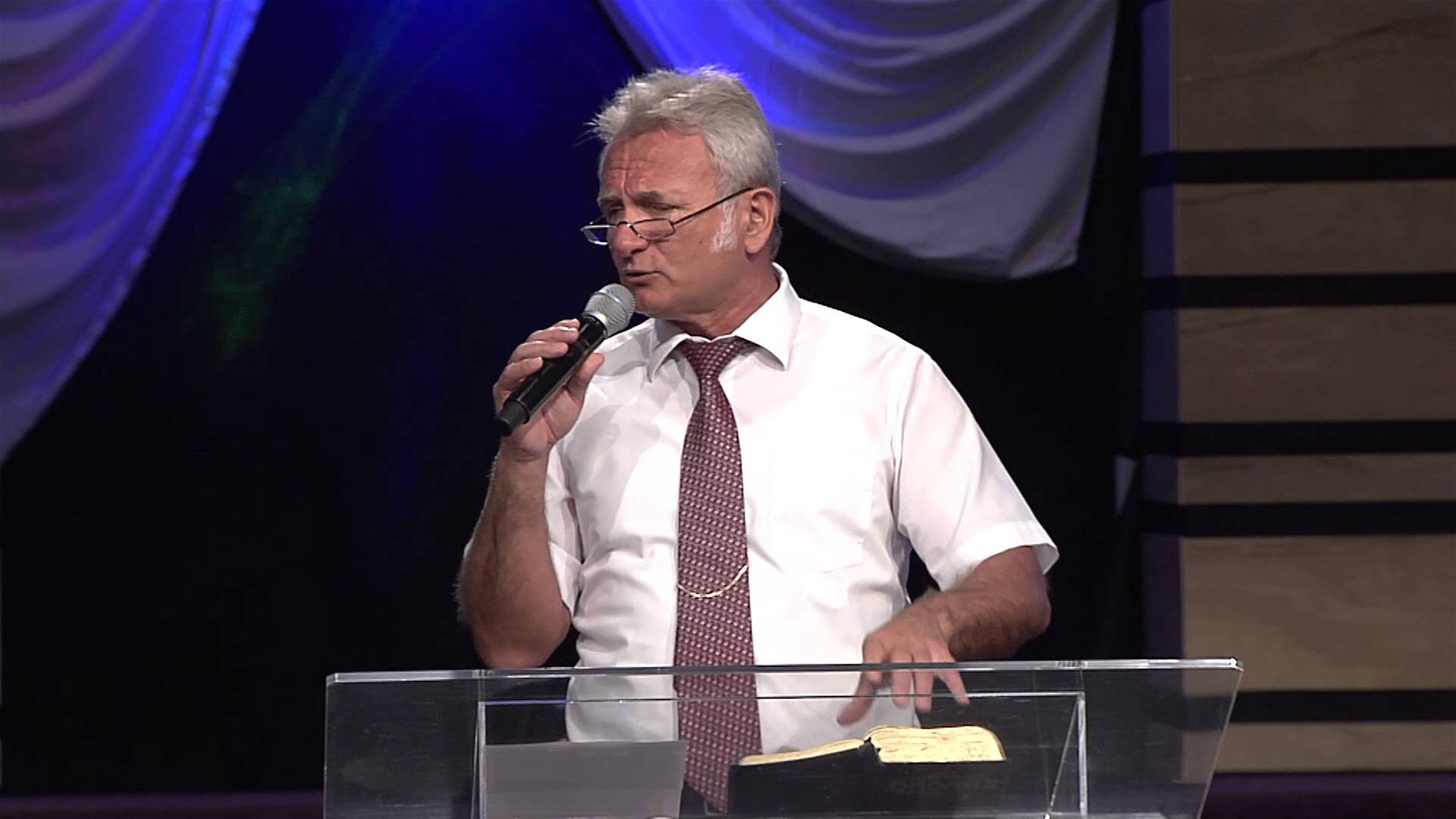 I was born in a Christian family in 1956. In 1960, our family moved from the Caucuses to the city of Mariupol in the Ukraine. Unfortunately, when I was young, I rebelled against Christ. But God worked through various ways to teach me in spite of anything. Almost every Sunday evening my parents hosted people at our home for services. I could not escape those meetings, so I was forced to be there and received food for thought.

Also, very often God woke me up (I have no other explanation of it) to hear my mother praying. She was and is a very intelligent woman, and she knew what to pray for. Because I was the youngest of six children I had to sleep in my parents’ room and therefore I could hear my mom’s prayers. Now as a pastor looking back, I can see that the Lord was already beginning to prepare me for salvation. When I was about 16, I believed that God existed, but I insolently told Him to leave me alone. I felt that I could be happy without Him or His help. (May God give His mercy to everyone who acts blatantly before Him.)

At about that time, I began to do marine multi-wrestling. I had very high self-esteem as I was involved in this difficult sport of running, boat racing (on yawls), swimming, shooting, and rapidly moving under a sail. In a year I was a candidate to be a master of sports and the champion of the Ukraine on our team. I was very proud in myself and felt I was proving to God that I could succeed very well on my own, without His help. However, over the years since then, I have been reaping what I sowed at that time. I have to deal now with health problems (I hurt my spine then), and have to face the consequences of my pride. If you wage a war with God, it is always costly. However, those who start this war do not think about the consequences.

In 1994, I was listed into the military sports reserves of the Black Sea Navy. But these plans changed, and instead, I ended up serving in the Soviet Army in the Department of Anti-aircraft Protection in the Caucuses Mountains. In one year and half I became the vice-commander of the platoon, the Komsomol leader, and headquarters coordinator. That time was characterized by wild drinking, fighting with older fellows. Doing all this, I think it was only because of God’s mercy that I was not seriously punished. I was to be imprisoned for two years, but somehow I did not end up being imprisoned. Some months later, I had a new set of problems despite having been taken to another division. I was sent by other soldiers to buy vodka so we could get drunk. They (older army fellows) already wanted to get revenge on me. As soon as I left, they telephoned the soldier on guard duty saying that I had stolen a car. All that finished very simply: I fought with the soldier who was on duty, but he was about to shoot me as one would shoot a wild dog. Now, I am ashamed for all I did then. At this time I was told that without doubt I would be sentenced to prison for two years! At this point, my relatives and Christian friends prayed for me. I did not know what happened, but I was released from prison. I was sent to the other department to build an aerodrome in the city of Svetlograd. There the situation did not change much. Oh, God how stubborn we are! I was a driver there, and during the day I brought wine for soldiers, and at night I catered to the officers, driving them to places to hang out. I really looked into the eyes of death lots of times during this time of army service.

Some months later, I entered a technical school at a machine plant in the city of Stavropol. I got a new track GAZ-66, regular clothing (not army uniform), and lined up with some special groups from Moscow. There, at that point, something started to change in my soul. I just wanted to live. Every morning I took off an army hat and asked God to save me. In the evening I would be at a drinking party and in the morning, I prayed to God again. My life began to lose its meaning and purpose. Everything was mixed up in one pile: vodka, debauchery and fear. I recognized I had lost myself in this race of life. I was a bankrupt and I faced a deep pit. It was really scary. I still remember that horror. I tried to commit suicide and I knew that only God saved my life then.

It seemed to me I hated the entire world, but at the same time I understood I needed God. It was not easy. Finally I asked God to forget my silly words. I just lost my own way of life and I was a bankrupt. I asked God for His mercy and love, because I was so lonely and scared. I received His answer. The fear disappeared, as though someone’s hand defended me rotating to the other side. God accepted me! I am so grateful to God, to my parents, sisters and brothers. They won my fate from folly. Satan tried to bring me to him using deferent ways even appearing before me. But already it meant nothing to me, because my destiny changed forever. Praise and glory to my God!  Let my example touch somebody’s heart and help them to come to God. If it happens, my soul is rewarded once again.

Call to Ministry and Vision

I am 55 years old now. I have a very sweet wife, Anna, and five wonderful children: Helen is 29, Maxim is 28, Carina is 18, Alina is 16, and Timothy is 10 years old. God really gave me a great and happy life. I am among those who praise God and serve His kingdom. Looking back at my ways in the past, I come to wonder and get excited about how God led me through all the circumstances. As in a puzzle many pieces were gathered to one picture.

But I realize it now. Back then after my repentance I stayed at my friends’ house in the outskirts of Moscow. One day I took a walk to a neighboring cemetery. I wanted to look at gravestones. I believe sometimes they teach us something. There was a small Orthodox Church. I came to the Church fence and entered the cemetery near it. Right there at that cemetery I believe God called me to ministry. I really felt that calling. On one gravestone I saw names and dates of birth and death of one family: parents and seven children. The fate of an entire family became clear to me. The youngest daughter was 7, the oldest son was 19. Their parents died after the death of all children. God Lord, save us from that.

When I stood there something happened to me. I cried and prayed there for a long time. Fire was burning inside me. I realized I would not be able to eat and sleep while wickedness and sin were preparing fear harvest. My destiny was defined. But in my story there was one other part, that I did not know about for many years. A group of people started praying nearly at the same time for salvation of the Udmurt Republic. Those people were from Sweden, Solno from a Pentecostal Church. Among those people there were Shill and Sally Gernstrem, very dear people to us. Now I am sure their prayers affected my destiny.

The years passed, and in the spring of 1990, I had moved to Izhevsk (the capital of the Udmurt Republic in Russia) with a missionary commission from our merciful and all-powerful God who provided all that was needed. How grateful I am to God for allowing me the privilege to share in His glorious kingdom here on earth! Now, as senior pastor of Philadelphia church in Izhevsk, I have the joy of seeing missionaries sent to various regions of the Udmurt Republic, and throughout Russia. Over the last several years, we conducted one-year Bible College classes to train future pastors and missionaries. We hope soon to be able to complete the construction of the largest Protestant church building in Russia, which will house dormitory rooms for boarding students taking Bible courses which our church conducts, class rooms, offices, sanctuaries, and a training facility to teach people essential working skills here. We are hoping to be able to share this 4 story building with other churches in Izhevsk who are also struggling with the problems of renting expensive theatrical buildings, and having to change locations as required from the owners.

Reflecting on the joys and sorrows of my complicated past, I am amazed at how the Lord has blessed me, and His dream He has given me for Udmurtia. I am looking forward to 200,000 being saved in Udmurtia through the outreaches of Philadelphia church, and to sending out missionaries to different countries of the world. Perhaps you will feel I am just a dreamer with a great imagination, but that is not offensive to me because I believe that God is the God of the impossible. And my dream is to help implement spiritual growth and renewal in many churches of the world. May God be glorified in the years to come! 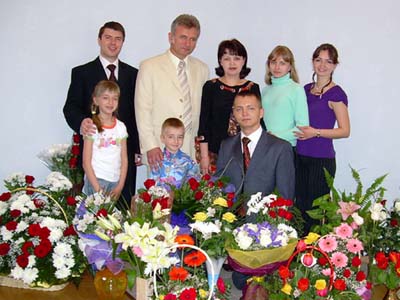