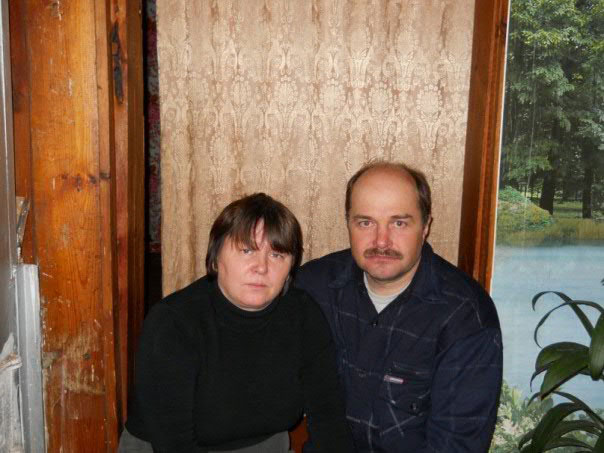 «Therefore go and make disciples of all nations, baptizing them in the name of the Father and of the Son and of the Holy Spirit, and teaching them to obey everything I have commanded you ...» (Matthew 28:19-20, NIV)

Missions work. What do most Christians think of it today? Perhaps, someone reading the last chapter of the Gospel of Mark, verses17 and 18, believes that this ministry is exciting. For other people, on the contrary, the work of the gospel seems very difficult, and that it is designated only for a few chosen people. But as they say today, the truth is somewhere in the middle. In addition to the difficulties, missionary work, of course, involves gaining a deeper knowledge of God, manifestation of His Glory, joy of knowing the will of God and wonderful blessings. I would like this interview with Vladimir Vladimirov, to be a proof of that.

In 1998, immediately after the graduation from the Bible College at Philadelphia Church of Izhevsk, newlyweds Vladimir and Lyubov Vladimirov, moved to a distant town of Sosva in Khanty-Mansiyskiy Autonomous District (North-West Siberia)*.

1.    Vladimir, when it becomes difficult and it seems that something is going wrong and is not working, when sometimes you want to give up what actually stops you? What keeps you and Lyubov going in the remote region of Khanty and Mansi, in the town of Sosva?

First of all, I would like to thank God for His mercy and faithfulness to the word, which He spoke about us and our ministry. God has done so much in our lives, and I believe that He will do even more. So that we may boldly say, «Temporary difficulties do not matter.» If we talk about feelings, the desire to leave sometimes, of course, is pesent. But there is God, there is His will and His love for people. It is by the revelation of the Lord that we came to this province, and when it becomes particularly difficult, we are standing on His word and make sure that His will has not changed, and we move on. We are dealing with God, and He is so great that His grace and power abound. Difficulties come and go, but the Lord is with us. And people! If it is not us who will bring His word to their hearts, then who? He sent us, and we must do it.

2.    Actually, this town is not large. It is in a big city where you can somehow get lost. But you are always being observed by local residents. Tell us how they met you at the beginning, what they thought and expected from the «new comers»?

In the beginning, when we started to gather at the local Convention Center, there were many people. Everything was new for them. Many thought that they only needed to come one time to ask for forgiveness of their sins and life would turn into a fairy tale. Everything would become just perfect.

3.    What has changed in their minds since then?

Those people who sincerely accepted Christ and believed Him remained. Some of those who left said that they wanted to attend an Orthodox Church, but we don't have one in our town, so it's hard to believe them. Others had some dreams and desires that were not fulfilled, and they were  disappointed. They did not have enough faith to wait for the promise. May the Lord be merciful to them.

4.    Outback northwestern Siberia is the place where there is still much paganism. Or does it weaken its influence because of the inevitable invasion of civilization?

Yes, it is there, but it became so to say «underground» or disguised and became a kind of a game, when for the sake of some pagan festive event sacrifices are made, and people say that it is not a ritual. Very often they do not think about the catastrophe they are pushing themselves into, do not think about the fate of their loved ones.

5.    Can you tell me, what do modern Khanty and Mansi believe in?

In short, it's just kind of mixture of everything, there is a place for Orthodox beliefs, and shamanism**, sometimes cleverly hidden under the identity of the national culture.

6.    Is it always easy to understand this «distinctive national culture» or is there sometimes misunderstanding?

Yes, it happens. Dealing with people who are different from yourself, it is important to explain as precisely as possible, what you mean. Here, for example, one funny story that happened to us during one trip. One time we were with foreign guests, also missionaries, in a very distant, remote village where we were handing out humanitarian aid. We were approached by a little boy, his complain was a toothache. He was given a good toothpaste and a toothbrush and he was told that if he started to brush his teeth, then it would stop hurting. The next morning he came back and the boy's grandmother said her grandson did not sleep all night.

– Was it because of you toothache again? – we asked.

– No, – his excited grandmother answered. – It's because my little grandson was brushing his teeth all night.

In this situation, our mistake was that we did not explain to the child that the teeth would no longer hurt if he used the toothpaste regularly. Apparently, the boy wanted to put an end to his pain at once.

7.    Well, it's a funny story. But, seriously, Vladimir, what do you think is the most important in preaching salvation these days: is it to be truly the «fifth gospel» that is, from day to day to show people Christ Himself by our lives, or is it the vivid manifestation of God's power?

One can not be without the other. Jesus said, «Go into all the world and preach the good news…and the signs will accompany those  who believe.» (Mark 16:15, 17a)

8.    If this is the case in your missionary experience, then please tell our readers about the manifestation of the Holy Spirit.

We have witnessed how the Lord healed seriously ill people and restored their health. Once, I witnessed how the Lord casted out demons. It is sometimes hard to talk about it, because the life of a Christian is the victory of the Holy Spirit. In our church, there is a woman, who the Lord over time made so entrenched that when the tragedy occurred in her life, she bravely endured it. You know, it's also a miracle.

9.    How many people were converted to Christ in this town because of your stay there?

Now in our local church there are 6 members. Some of those who got saved in our church, are now with the Lord in heaven. Some people moved out of the town, and we are pleased to hear news about their good walk with the Lord. We minister to people in their homes, since many people are still afraid to go to meetings in a public place, so we chose a different tactic and went to them.

10.    Our church in Izhevsk [Philadelphia Church] is constantly praying for your family. At present there are people who do not even know you personally. And I want you to set up some priorities in our prayer for you. So, what should we ask the Lord for your missionary work?

We ask you not to forget us. It's nice when you have a home where you are loved and prayed for. Pray for our faithfulness. Pray that the Lord would lead us to people whose hearts are ready to repent, but they have not yet opened them for the Lord. Pray for the people who are dear to my heart: my wife Lyubov and our son Pavlik. Once everything is calm in the rear, then it is easier to go to battle. May the Lord be with them.

*Khanty–Mansi Autonomous District, also known as Yugra (Khanty-Mansiysky avtonomny okrug – Yugra), is a federal subject of Russia (an autonomous okrug of Tyumen Oblast). Population: 1,532,243 (2010 Census).
The people native to the region are the Khanty and the Mansi, known collectively as Ob Ugric people. The local languages, Khanty language and Mansi language, which are related to Hungarian, enjoy special status in the autonomous okrug, while Russian remains the only official language.
The majority (51%)of the oil produced in Russia comes from Khanty–Mansi Autonomous Okrug, giving the region great economic importance.
- Wikipedia


**Shamanism (pron.: /ˈʃɑːmən/ shah-mən or /ˈʃeɪmən/ shay-mən) is a practice that involves a practitioner reaching altered states of consciousness in order to encounter and interact with the spirit world. A shaman is a person regarded as having access to, and influence in, the world of benevolent and malevolent spirits, who typically enters into a trance state during a ritual, and practices divination and healing.
- Wikipedia