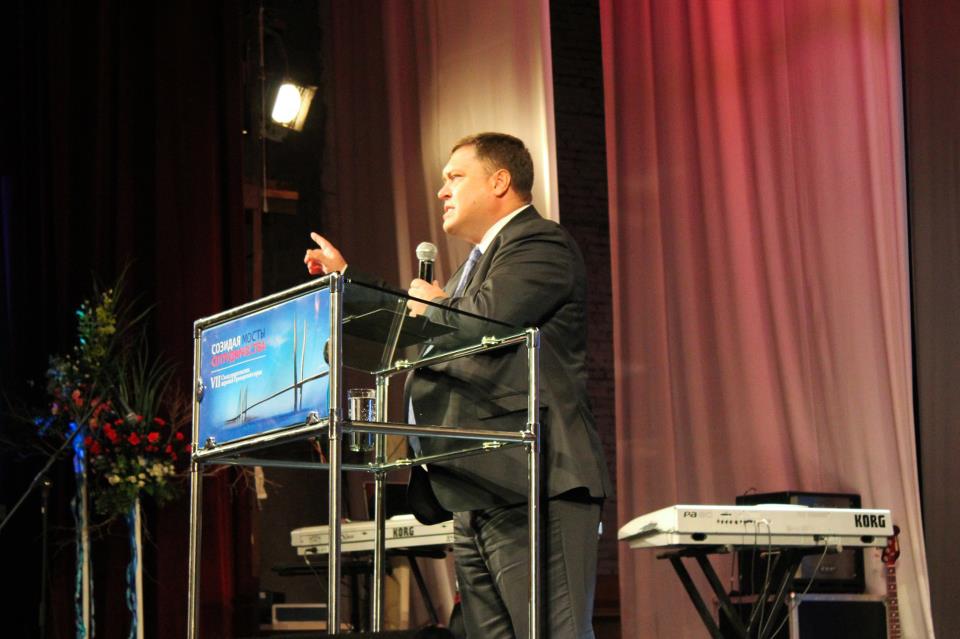 While perusing the internet, I noticed a short video that was just released on the hve.ru website today. From time to time I visit the organization’s website, since it is both in Russian and English, and it offers a unique perspective on news and events across Russia from the church’s perspective.

The video is less than 3 minutes long, and features the Head Bishop of the Russian Evangelical Christian Church, Edward Grabovenko, answering questions about the church’s role in social outreaches, and its vision for meeting the needs of Russian society in the future. I also found it interesting how he replied in the Q&A section of the website, in particular regarding the country’s tendency to implement foreign systematic models in Russia, simply because they were successful in other countries. His answer was pretty clear and in line with what various church representatives have said on other occasions where I have had the opportunity to talk with them: what works abroad should not immediately be implemented here in Russia, and the church is no exception to this. Simply ‘copying and pasting’ will not work, but moreover, this country has such a unique demographic situation that a simplified ‘one size fits all’ way of doing things will not always work. And I personally believe that this does not apply simply to religious affairs, but also to many different aspects of Russian society.

Head Bishop Grabovenko also believes that if the Russian Evangelical Church is going to effectively reach out to its own people, it needs to receive any and all advice with a dose of caution. What works in another city, country, or local population may not work for others, yet it is up to church leaders and workers to take the time to listen, think, and pray: listen to the advice of other Christian workers abroad, but take plenty of time to think about if certain models will really work for their community, and to pray for inspiration on the best possible way to reach out to them.

I have to agree with the bishop in this area, and I must say that this is an issue that the REC church’s leaders and workers seem to agree on across the board. In the 1990’s, so many different religious groups flooded Russia after the end of the Soviet union, that many people described an overwhelming feeling of what to make of it all – is it something that they should receive with ‘open arms,’ or should these groups and ideas simply be labeled ‘alien,’ as just more foreign influence that Russia doesn’t need? I am well aware of the fact that many Slavophils would echo a resounding ‘yes’ to that question, but let me just add why that would be detrimental to Russia’s progress as a unique society.

The Russian Evangelical Christian Church outreaches that I have seen and participated in have demonstrated to me that the participants are discovering and developing their own unique identity throughout this process. They are no longer trying to just mimic some foreign influence as in the past, but are learning and growing as individuals and professionals in the process of reaching out to their own communities. Many REC churches in Saint Petersburg, for example, have been developing their own unique culture in the performing arts. In fact, they have been taking the former-Soviet tradition of amateur performances at ‘Dom Kulturi’ and ‘Dom Molodezhi’ (Cultural and Youth Centers) and reviving it to an extent, offering a platform for churchgoers to participate in worship and social outreach events through music, dance, and theatrical performances. This cultural revival is not intentional, in my opinion, since the sheer lack of money to obtain their own facilities in this architecturally rich city has forced many non-orthodox church organizations and groups to rent office and theatre spaces in these forgotten buildings in order to conduct church activities and hold events. But instead of this rather large logistical obstacle inhibiting them from growing and reaching out to society, it has become an artistic vehicle for them to share their faith with each other and with the community in a very creative and personal way. Yet let’s not forget that the church’s self-realization and artistic growth is a work in progress (and always will be), since in previous eras these platforms where either highly discouraged or forbidden altogether. But if Russia as a whole is going to progress and effectively reach out to the many different cultural and ethnic groups throughout the country, it should heed Head Bishop Grabovenko’s wise advice to listen, think, and pray before acting hastily.

By Angelina White, MARCA Program at the European University in Saint Petersburg