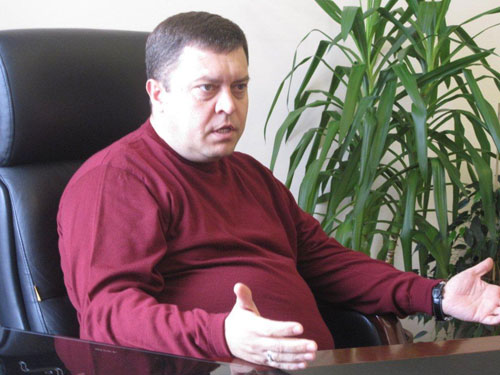 Interview with Eduard Grabovenko, the Head Bishop of the Russian Church Summary of the work undertaken in 2010

— What has been achieved in 2010 according to your election program?

— First of all let me remind you that in my program that was presented one year ago at the elections there were three main directions: evangelism, effective management model and support of local churches. What has been done? The Pastoral Care Department under the leadership of Bishop Alexey Rudenky organized 17 conferences during this year. Bishop Rudenky was in touch with local pastors encouraging them and providing spiritual care in their work.

There are positive changes in social ministry too: it was decided to create a united charity foundation and also social centers coordination office. In 23 regions we work with street children, and also do abandonment prevention work.

Russian Church of Evangelical Faith was presented on the international level: our delegations visited 12 countries during this time, as a result of meetings with other unions certain agreements were reached.

We managed to reduce expenses of the cabinet as some departments now work remotely in their regions. Youth, Analytical, and Missions Departments, and also Women's Ministry function in Perm, Pastoral Spiritual Care Department is located in Volgograd, International Department is in Pskov, Social Ministry Department is situated in Naberezhnye Chelny.

It is important that we raise funds to help churches complete the construction of their church buildings, thus we solve some urgent issues of these churches.

We passed a compassion test when churches of Russia did not remain indifferent to death of Pastor Arthur Suleymanov in Dagestan. Together we raised money for the pastor's family, which showed our unity.

— Local churches in the Russian Church/Pentecostal Union have always been independent to some extent. Is it true that now you are in the process of centralization and getting to well-defined management structure?

— At the General Council it was decided to bring all the legal issues concerning churches registration in line with Russian laws, so that churches could join Russian Church without any obstacles. Evangelical churches formed unions in different regions, at that time it was an urgent necessity. At some places there were no regional unions. We are working towards common evangelistic space with common values and one center. Today we are on the way of forming united body of the Russian Church of Christians of Evangelical Faith, this will help to represent the Union to governmental authorities, among other Christian denominations, and Russian society.

— Does this unification concern only legal issues or doctrinal ones, too?

— As for doctrines, we have been united long ago. Churches of the Union/Russian Church have the same religious practices. In fact and in spirit we are Pentecostals regardless different forms of ministry. There are different ministries but the same Spirit. Uniting different churches and learning from each other and respecting each other are great achievements of the Russian Church.

— How can evangelical churches in the center of Russia and provinces become closer?

— Indeed, there was a big communication problem because of remoteness of churches from each other. Leaders visited some regional churches as often as once in 20 years. We want to change the situation, for example organizing Bishops’ meetings in the regions as it was in Irkutsk. Next Bishops’ meeting will take place in Khabarovsk in March 2011, where we also plan to hold a regional conference for all Christians of the Far Eastern Federal District. After that we plan several official visits to Vladivostok, Magadan, Yuzhno-Sakhalinsk, Petropavlovsk-Kamchatsky. Thus, we build relations with remote local churches, that they don't feel lonely. This goes together with the principle: It's not churches that exist for the central office but the central office for churches.

— What are the quality changes in the process of spiritual education in Russian Church?

— It's a chance of developing a three-stage educational system that allows to give elementary theological education, and a possibility to complete Bachelor's or Master's programs. We are trying to make education available in terms of location not only in Moscow but in the other parts of Russia. Today we are analyzing the work of existing educational institutions, and try to improve and coordinate their work. At the moment 2,500 students are studying in different educational programs. Education is a progressive area, it always follows demands of church and its changes. We want to make education available and blessed for achieving goals and vision of the Russian Church.

— What do we need to do so that Christians wouldn't be considered outcasts in our country?

— We need active participation in the life of the country at the regional and federal levels. I am sure that church is an institution created by God for strengthening national identity, patriotism, and also spiritual values. Church is the salt that won't let the society rot. Evangelical church can't accept liberalization that leads to legalization of sin.

The work being done by the Russian Church with socially unprotected people, those in prisons, preventing social diseases, such as HIV/AIDS, drug addiction and alcoholism will be in demand with authorities and the society.

Church can preserve our society from moral degradation and even physical destruction.

— Please tell us about implementing the One Year for Jesus project.

— The Missions Department is working with the One Year for Jesus project. The head of this department Konstantin Makushin has made more than 60 trips to the regions during a short period of time. He was presenting the project, getting new connections with churches, missions, foundations, different organizations.

What do we mean when we talk about unreached areas? At the Soviet time towns were built in the places where there were big mining plants, some industrial and military units. During last years many of them disappeared but towns and villages still exist there. People who live there do not see future any more. Our purpose is to reach everyone with God's Word, so we go to remote towns. I agree that population of big cities is more worldly, but more than 90% churches are there, too. Churches in big cities use mass media, advertizing possibilities, organize information campaigns. We want to give equal opportunities both to townspeople and countrymen to hear the Gospel. We are not waiting for people to come to church but church goes to people. If all Christian denominations follow this rule then we won't see so many alcoholics and drug addicts, broken families, social aggression and other problems. If only Church does what God calls it to do.

Church should not be political, it should carry spiritual and moral values and be represented in all spheres of our society. Believing that God helps people live, gives them a reason to live.

— What encourages you most?

— I'm most encouraged by the fact that I'm a sinner forgiven by God. That's why I owe Him forever. When I think how much the Lord has done for me I realize I haven't done anything for Him yet. If God has mercy on me then wouldn't He have mercy on others? If God saved me then I want Him to save many more people.

The head Bishop was interviewed by Andrey Derbenev