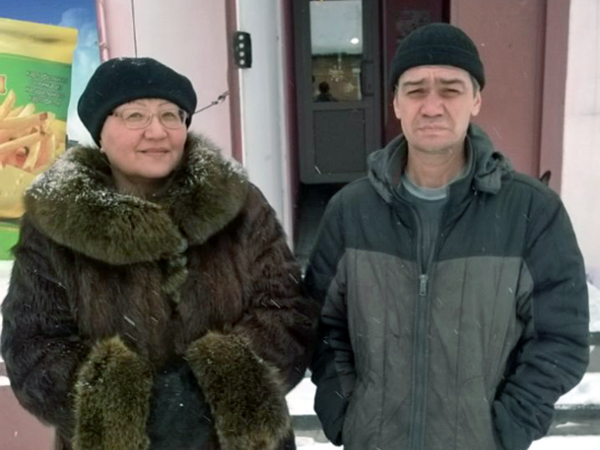 NOVOKUZNETSK (RUSSIA) - The morning was wonderful: warm, fresh snow. We came to Plodopitomnik village in Prokopievsk district in Kemerovo region for an outreach. Our team of two was not welcomed by the villagers – they weren’t opened, some would even send us off. We were discouraged. But we stood firmly on the promise that God would answer our prayer, we stopped, prayed to meet the people who desperately needed God.

As we approached a village store, we saw a man. His name was Volodya. We began to talk to him and realized he had an urgent need, but he wouldn’t tell us what the matter was, we could only see he was weeping. At that moment a store attendant went out to the porch, began to scold at us and harshly said to Volodya to “come inside at once”. We went inside together with him, and after a brief talk the heart of the woman softened, and we found out that she and Volodya were a couple and she was expecting his baby. But then she said that Volodya was not her husband, they shack up together, and for a long time she expected Volodya to propose to her. Volodya, for his part, could not make the decision, though he never had children, and this was his last chance to have a family of his own.

We offered to pray for them and said they should reconcile with God. Volodya and his future wife prayed and asked God to forgive their sins. We explained to them that their next step should be a wedding, heard Volodya’s promise and went away.
We suppose he proposed right after we had left, as we were walking away, he ran after us thankfully offering us a chocolate bar.

How good is our God! In 10 minutes He has changed that woman’s heart. She started with scolding us, but then began to listen, then prayed with us and Volodya, and even wanted to bless us with a chocolate bar. With God there’s always a place for a miracle. A Bible verse comes to mind: “Come to Me, all who are weary and heavy-laden, and I will give you rest” (Matthew 11:28).

Team of the Church on the Rock,
Novokuznetsk