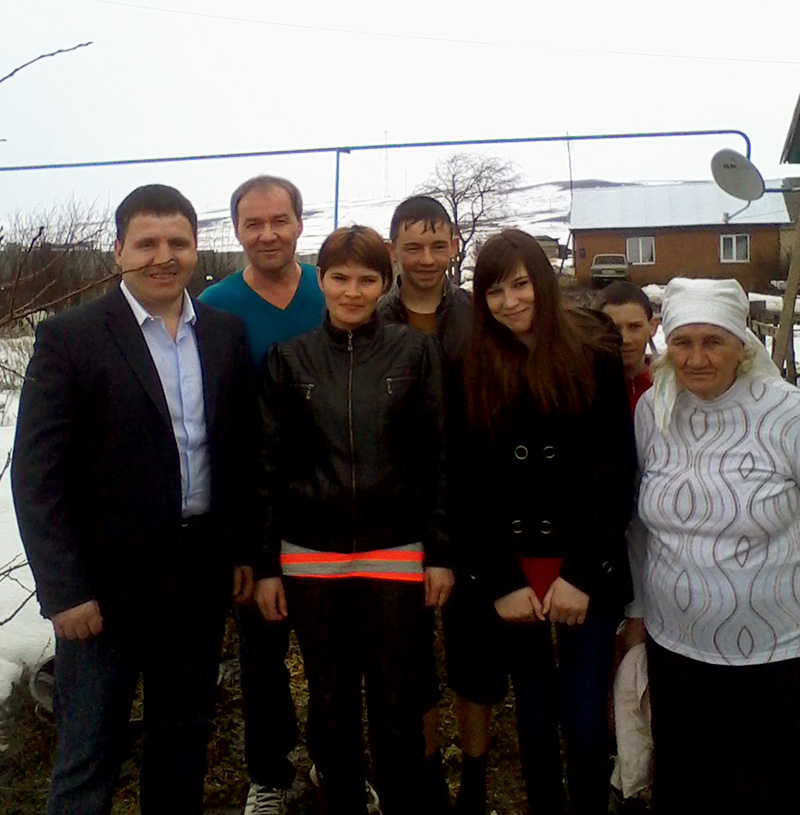 ORENBURG (RUSSIA) - Our evangelistic team has been working for more than three years now, 1-2 times a week we go out and preach the Gospel in our city and in neighboring towns. In a small town we try to reach every home, to tell the Good News, to give the New Testament, and make friends. On these trips, as nowhere else, we feel the truth of the words of our Lord Jesus: “If they accepted Me, they will also accept you. If they persecuted Me, they will also persecute you.” In other words, some places we were accepted with hospitality, other places we were immediately pointed to the door. Therefore, as we begin to miniser in a new place, we know that even if there are persecutors of the Christian faith there, there should be neccessarrily people of peace, and we look for them.

One time in the town of Chernorechye of Orenburg region we faced such opposition that we had not seen anywhere else. Though the Scripture warns us about this, for us it was a surprise – when people heard about God, saw New Testaments in our hands, they just shut the doors in front of us, sometimes their actions were openly accompanied with hostile words.

Frankly, at first we did not think much about the incident, but when it occured again we began thinking. Was it because we preached in a wrong way? Well, we preached the Gospel as we always preached. Perhaps, we did not have enough prayer support? Our church prays constantly for the missionary work. Did we ‘venture into others' home with a charter of our own’ according to a Russian saying? Well, we do it all the time. Other versions were suggested, even we thought about quitting our work in this town. But in the end we came to the conclusion that there was just too rocky soil there, which required more efforts than usual. In other words, we should perservere and knock at every door. And it was wonderful that we made such a decision!

Pugacheva Street in the town of Chernorechye was in the outskirts, it stretched to the fields and beyond the fields there's the Ural River. We were not expecting any kind words, just methodically worked through the territory, sowing the seeds of the gospel. There  were four of us, two teams of two people, and at some point we decided to split up – one team went to the beginning of the street, and we lingered, talking with one of the locals. Unfortunately, the conversation ended with virtually nothing, we went to catch up with our friends and then saw a man of about 65-70 years old at the gate of his house. We should note that a little while ago we were met at the same house by a young woman who didn't want to talk to us, and reluctantly took the New Testament. Moreover, we were surprised when the man – he introduced himself as Alexander – called us and invited us into his home, to have some tea and talk. We were touched by his kindness, but found unacceptable to sit and have tea, while our brothers and sisters working,. We agreed that we would be back in a week, and then we would sit at the table, and have a talk.

A week was crawling like a snail, we could not wait to see Alexander. When the time came, Alexander was not at home, but instead the Lord gave us an appointment with his daughter named Irina. She showed such lively and genuine interest in the Word of God and the Gospel that we just forgot about everything else! Truly, the Lord has a food that we do not know. We became freinds with her and continued to visit this town. Irina became a person of peace for us in Chernorechye.

For the sake of such pearls we plow fields of badlands. The Lord has sent us to preach the Good News to people, and the harder the way, the happier we are. With new hope and sincere joy we continue our work in the town of Chernorechye.

Team of the Word of Life Church, Orenburg