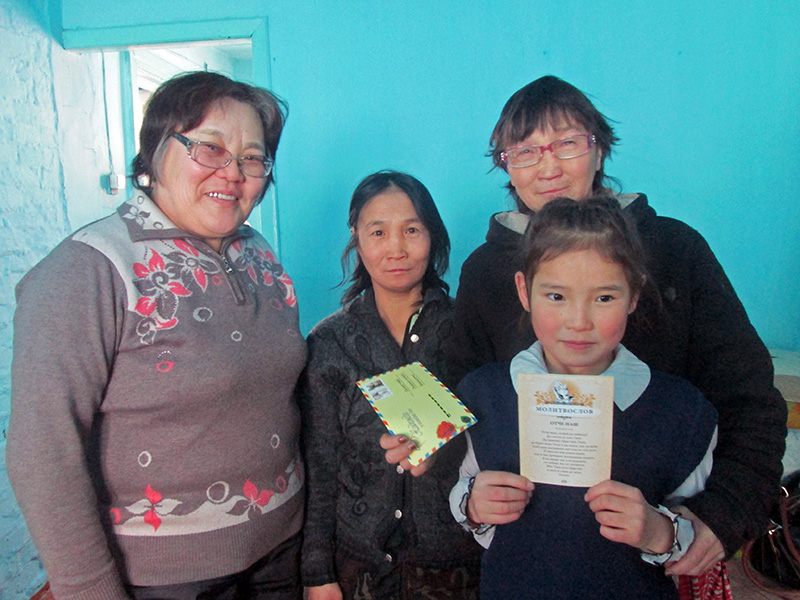 ULAN-UDE (BURYATIA, RUSSIA) – By God’s grace we continue to preach the Gospel to the people of Buryatia and they get saved. They are thirsty for God. An old Buryat woman of 87 years old repented after sister Marina told her about God in Buryat language. One day after that we returned and brought her a Bible in Buryat language. She took the sinner’s prayer and the Lord’s prayer – a brochure in Buryat language. Her granddaughter promised she would read it to her and memorize it.

One man invited our team members in, took them to the icons and said, “I was afraid you would hypnotize me, and then I realized you’re not strangers.” Then he happily repented.

In one village we had a chance to lead a home church meeting with five newly converted women. Their hearts were open, they talked about God and read the Bible, prayed, and one of them, Namzhilma, said: “Next meeting we be at my house.”

God allowed us to meet a man who was about to commit a suicide. Sister Gelya shared her testimony, he repented and was very happy about it.

Team members knocked on a woman’s door, she had been lying down for three days, but on that day she was able to get up and open the door. We shared with her the Good News about salvation. She repented and cried. We prayed for her healing and for all her problems to be solved.

One woman told us she was sick. We asked for her permission to pray for her and after the prayer she received healing. She rejoiced when she received the Good News and repented!