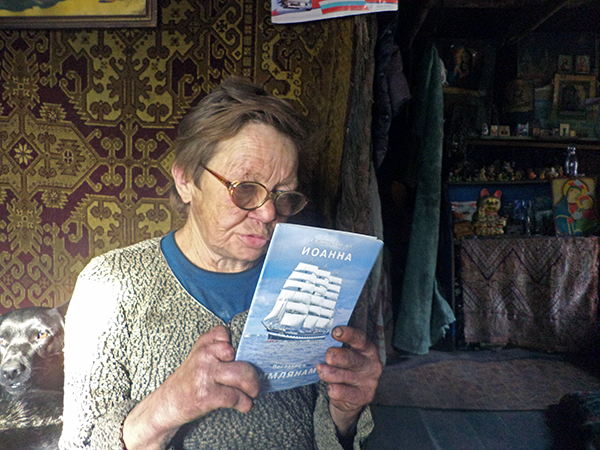 ULAN-UDE (RUSSIA) - By God’s mercy our team continues to regularly bring the Gospel of hope to many people. During fall and winter we’ve been preaching in new residential locations and continued to preach at where we had started to share the Good News before: we visited towns of Kyakhta, Selendum, Novoseleginsk, Gusinoe Ozero, Gusinoozersk.

The evangelists came to the house of a Buryat woman of 90 years old. A man who took care of her said that the lady couldn’t move, she lied in bed and couldn’t hear. But when sister in Christ Natalia shared the Gospel with her, the old lady prayed the sinners’ prayer, grasped Natalia’s hand and didn’t want her to leave. She pronounced aloud: “Jesus Christ is the Lord!”

When we were on the way from one home to another, we saw a solitary house on the edge of the village, and we were in doubts if we should knock the door. After we finally decided to come and knock the door, a man opened it and invited us in. His wife was also in the house. He listened to the Good News, then repeated the sinners prayer. All that time his wife was silent and was cooking meal, then she invited us to dinner and shared her remarkable story.

Many years ago she got very sick. Her stomach grew huge in size, but the gynecologist said there’s no pregnancy. For eight months she was in pain. The doctors said that was a tumor, but couldn’t diagnose it. The woman went to every place she could think of looking for help, but nobody – neither doctors, nor shamans, nor witch doctors – could tell her anything. Once she met her ex-classmate, who was a Christian, and she invited her to come to a home church meeting.

Further we will quote: “I decided to go to that meeting. A pastor came, he laid his hands and prayed together with the other Christians. That night I woke up and saw a huge pillar of light, as if it was a spotlight. I couldn’t believe my eyes. Then the light vanished and I was trying to understand what that was. Then I fell asleep again. When I woke up in the morning, I found out my stomach got back to normal size! I put on my pants I used to wear before the sickness, and went to work. When I was telling people about what happened, nobody took it seriously and didn’t believe it was God’s act and a miracle in my life. I began to go to church and praise God. My grown up children began to oppose to that. Different problems, pressure and opposition from the family – and I stopped attending the church.”

Very many Buryats, after they become Christians, experience that. Though while the woman was sharing her story, her eyes were shining. She rejoiced that our visit and the Good News that we shared with her husband, brought back precious memories.

She was happy to meet people who understood her – she didn’t have anybody she could talk to about that before.

She is 60 now, and she and her husband are opened to continue meeting with us and study the Bible together. But, looking back at her previous experience, she is still afraid of her children and relatives. We ask you to keep this family in prayer, so that God would give them the boldness and courage to follow Him!