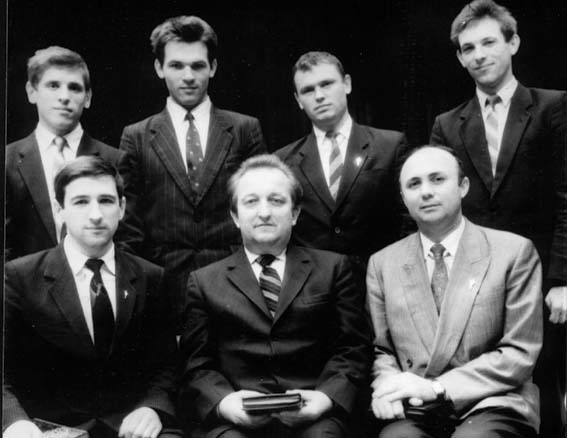 Evangelical movement in the world has a history of more than two thousand years. Christians of Evangelical faith appeared in Russia more than one hundred years ago, having overcome trials and persecution.
More than ten years ago the Gospel reached Tatarstan. And only thanks to God, Who opened the doors for Good News, for the first time there appeared an opportunity to share the Word of God openly.

In 1991 the Gospel started to be preached in Tatarstan. A missionary team, leaded by Vasily Ivanovich Evchik, started its ministry in towns and villages of our republic. Using every opportunity the missionaries were preaching the Word of God in cinemas, culture palaces, schools, prisons.

Many people who haven't heard the Good News were sincerely turning to God. Spiritual revival came to Naberezhnye Chelny. In a short time quite a big church has grown. The missionaries received a vision from God to work in other towns of Tatarstan.

God was supporting the Gospel preaching with miracles and signs. Many people were healed. Among them were people whom official medicine could not help. People who for many years have been living under the pressure of darkness and being possessed with demons were receiving freedom and were willing to serve the Lord. Many possessed were freed from the evil spirits and for the first time they could feel themselves absolutely free and happy.

There were many obstacles and actions intending to stop evangelical movement in Tatarstan.

But God was showing Himself in power and glory many times. What God has opened no one could hide and people who were in darkness saw the great light and salvation of our Lord Jesus Christ.

Within ten years of work God has given the vision of sharing the Good News not only in Tatarstan, but in the whole Volga-Kama region. In 1995 churches in Ufa and Oktyabrskiy (Bashkir republic), in 1998 the church in Cheboksary and a bit later in Novocheboksarsk (Chuvash republic) were opened. Also in 2000 the church in Saransk (Mordovia) was opened and services started to be held in Rtishevo (Saratov region).

The members of Aven Ezer Church of Evangelical Christians (Naberezhnye Chelny) serve as missionaries and pastors in many towns of this region. Aven Ezer church has become a missionary church and today it is a mother church for all the churches in Volga-Kama region. The churches of our region continue to grow under the wise guidance and leadership of bishop Vasily Evchik and we believe that more churches will be planted.