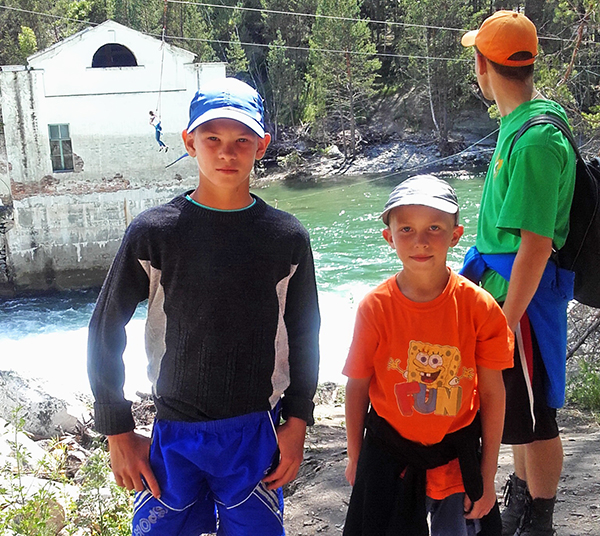 BARNAUL (RUSSIA) - A team from the New Life Church of Barnaul evangelized in the town of Kosikha in Altai region. All 6,000 residents of the town heard the Gospel, 276 of them reconciled with God, a home church started to meet. The team more than once have brought food products, clothes, helped people to landscape their yards. In the beginning of summer the team organized a celebration for kids with clowns, puppet show and a trampoline.

As a result, for two kids from Kosikha – Igor (14 years old) and Yuri (8 years old) this summer have become unique. And that was because they went to a children Christian camp. Amy, project coordinator in Barnaul, met the boys’ mother, Tatyana, when she started to come to church. Amy prayed for the brothers. The older boy is a troubled teenager, started to smoke, from time to time running away from home, disobeying parents and not helping them. The younger one was easier to deal with, but Amy believed that God was able to change them and decided to help them get to a Christian camp in Elekmonar town. According to camp leaders, at first the brothers were tense, especially Igor. But gradually they started to change: made friends with peers, got used to morning and evening prayers, happily participated in evening worship services. While at the camp, Igor and Yuri together with others visited Chemal Hydroelectric Power Station, indoor waterpark and paleopark, several times went to hiking trips and climbed a mountain. Igor and Yuri accepted Jesus on the first day of camp and the Holy Spirit began His work. The only problem was that the boys couldn’t read. But very quickly they acquired new spiritual habits, received lots of positive experiences and became physically stronger. They both received Bibles as a gift.

Amy told us, “I call their mother Tatyana and ask: How are the boys? Has anything changed? Her happy response was that they were excited and changed a lot: every morning and every evening they prayed together, their attitude to her changed, they became softer and more caring, kept asking, “How can we help?” And that’s a teenager who never helped before, kept escaping from home and never obeyed his mother – isn’t that a miracle?! There’s nothing impossible for God! Pray for these kids that God would raise them faithful servants”.